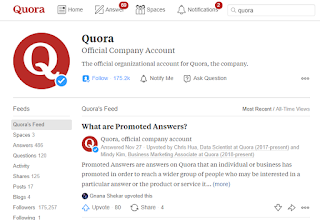 The knowledge sharing platform, Quora announced on Monday
that its users fall prey to an unauthorized access as hackers may have stolen
account information of around 100 million Quora users.

The information which was compromised in the data breach
includes email addresses, private direct messages, encrypted passwords,
imported data from other linked networking sites and the questions and answers that
were written on the platform by Quorans. The Q&A website said that the
information pertaining to the users’ location and contacts was also being
compromised.

“The overwhelming majority of the
content accessed was already public on Quora, but the compromise of account and
other private information is serious,”  Quora CEO, Adam
D’Angelo, wrote in an associated blog post. Meanwhile,
he noted, the questions and answers that were posted anonymously were
spared by the massive data breach; anonymous content remained unaffected.

The website which was founded by two former Facebook
employees, D’Angelo and Charlie Cheever, said that it is engaged with security
experts and law enforcement officials to probe into the matter and devise
effective solutions. Notably, additional preventive measures have been taken by
the company to strengthen the security and retain the trust that is invested by
millions of users across the globe.

Aside from that, the company said that it is logging out all
of its affected users in order to prevent further injury. Additionally, victims
have been notified timely via an email, they are advised to not continue with the
initial passwords and set up a new one.

“It is our responsibility to make
sure things like this don’t happen, and we failed to meet that responsibility.
We recognize that in order to maintain user trust, we need to work very hard to
make sure this does not happen again,” said D’Angelo, gracefully acknowledging
his duties, in the blog.