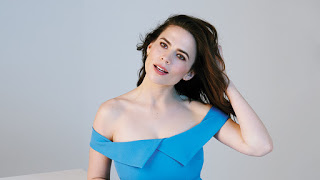 Hollywood actress Hayley Atwell is the latest victim of nude picture leak onto an X-rated website, hackers are threatening her to release some more.

The 36-year-old  actress is apparently shown in a nude “selfie” which was downloaded onto a website which claims to “specializes in explicit celebrity leaks.’

According to The Sun On Sunday, the hackers captioned the leaked nude image: “Busty British actress Hayley Atwell appears to have just had the nude photo above leaked to the Web as part of a preview for the upcoming leaking of her full set.”

The publication cites ‘other comments on the sick site are too graphic to print’.

A close source told The Daily Star: ‘This is a nightmare for Hayley.’

‘In recent years she has hit the big time in Hollywood, so this is the last thing she will have wanted to happen.’

This is not the first time when private pictures of Hollywood actors and actresses have been leaked and featured on an X-rated website.