The number of hacktivist attacks that resulted in quantifiable damage to the victim has declined by 95 percent since 2015, according to IBM.

It’s worth noting, however, that IBM’s data only includes attacks observed by reliable sources, only instances where someone took responsibility, and only if the attack resulted in quantifiable damage.

A majority of attacks between 2015 and 2018 were launched by members of the Anonymous movement, followed at a distance by Lizard Squad. 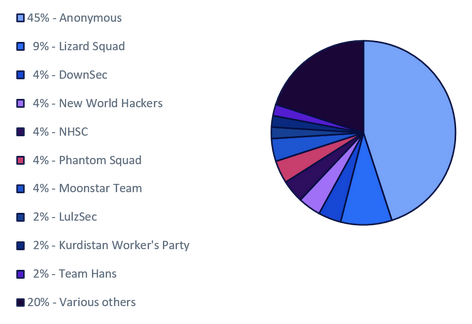 The decline in hacktivist operations has been attributed by IBM to two major factors: a drop in attacks launched by Anonymous, and successful law enforcement operations and convictions.

The movement gained traction in 2010, when Anonymous attacks targeted several high-profile organizations and made many news headlines. IBM said Anonymous reached its peak in 2016, when it started to decline “possibly due to an attrition of key leadership, differences of opinion and a struggle to find an ideological focus.”

Incidents that contributed to Anonymous’ fall include arguments between members during the 2016 presidential election in the US, and the emergence of fake groups that used Anonymous to legitimize their actions or damage the movement’s name.

Arrests and legal warnings targeting hacktivists may have also led to this significant decline in attacks, IBM said. Law enforcement in the US, UK and Turkey have successfully targeted hacktivists in the past years, with at least 62 hackers arrested since 2011.

A recent example is the case of a 34-year-old man from Massachusetts, sentenced to 10 years in prison for launching distributed denial-of-service (DDoS) attacks against two healthcare organizations while claiming to be Anonymous.

“We are reluctant to say that the era of hacktivism has come to an end,” said Camille Singleton, X-Force IRIS Global Security Intelligence Analyst. “Acute social justice issues, greater organizational capabilities among hacktivist groups and a stronger shift to areas that lay beyond the reach of law enforcement all have the potential to dramatically change the face of hacktivism in a relatively short period of time. More likely than not, we are experiencing a lull in hacktivist activity rather than a conclusion.”