BlueKeep, the Remote Desktop Service RCE vulnerability was
recently issued a fix by the 0patch platform, as a 22 instructions micropatch
which can be additionally used to ensure protection for always-on servers
against many exploitation attempts.
After the vulnerability was unveiled, the critical software
flaw known and tracked as as CVE-2019-0708 was at that point fixed by Microsoft
on May 14. Be that as it may, 0patch’s micropatch does not require rebooting
and it focuses on a quite specific gathering of people, not at all like the
Microsoft’s security fix, enabling administrators to fix frameworks that either
can’t be restarted or don’t consider for Microsoft security fixes to be
installed for different reasons.
Mitja Kolsek, the co-founder of 0patch says that, “This is
often due to always-on requirements, but another common reason is that
restarting a fleet of remote machines (e.g., ATMs) brings a risk of having to
physically visit all these machines in case something goes wrong (e.g., they
don’t wake up for some reason, or lose/corrupt in-memory data when they
restart),” 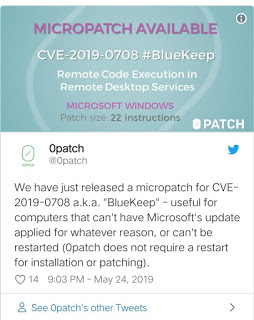 The fix is known to fix the vulnerability influencing the
32-bit Windows XP SP3 only, yet the company is likewise said to port it to
Server 2003 and different versions dependent on “user requests” to
help legacy systems.
While the 0patch fixes are generally intended to be a
substitute arrangement until Microsoft issues its very own official patches,
for this situation, they will most likely be a lasting solution for servers
that can’t be restarted — except if their administrators figure out how to
sidestep the issues keeping them from rebooting the machines. 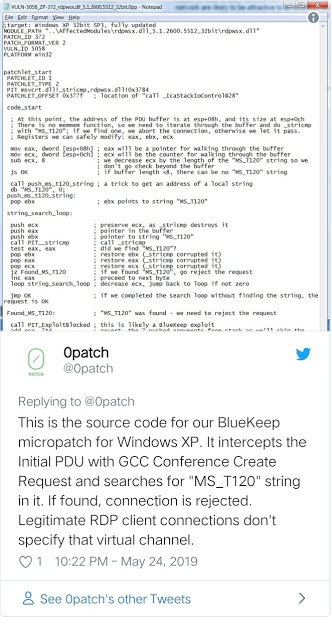 Another conceivable arrangement would be to pursue
Microsoft’s recommendations and switch on Network Level Authentication (NLA)
for Remote Desktop Services Connections on frameworks affected by the BlueKeep vulnerability.