Windows 10 April update is full of new features: Our top picks
Here are some of the new capabilities you can expect in yet another feature-packed semi-annual release.
Read more: https://zd.net/2HLtL6f 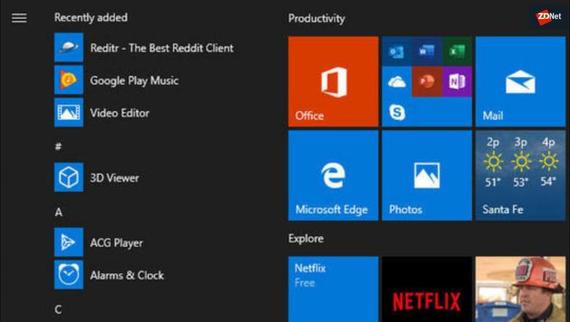 In May, Microsoft announced that come June it would begin updating PCs running these versions automatically. Version 1803 reaches end of service on November 12, 2019.

Microsoft’s @WindowsUpdate Twitter account has now flagged a new machine-learning approach to updating devices running the Windows 10 version 1803 aka the April 2018 Update and prior to version 1903.

“We are now beginning to build and train the machine learning (ML) based rollout process to update devices running the April 2018 Update, and earlier versions of Windows 10, to ensure we can continue to service these devices and provide the latest updates, security updates and improvements,” Microsoft notes.

Microsoft has also offered up fixes for Windows 10 users affected by a bug that didn’t give them the option of choosing key privacy settings during setup and didn’t provide instructions for how to change those privacy settings.

Microsoft says a “small fraction” of Windows 10 devices have been impacted by the privacy settings bug, and the company has released updates to address it in Windows 10 version 1709, Windows 10 1803, and Windows 10 1809.

Windows Update will offer the updates if it detects that the device has been impacted by the bug. Affected users will see a notification that provides extra information about the privacy settings that were affected and guidance to change those settings.

Microsoft doesn’t state exactly what the issue is other than it affects the “display of the privacy settings screen” and that customers “should have been presented with an option to choose settings related to their privacy while setting up their device”. They should have also got information about how to change the settings by going to Start > Settings > Privacy.

The company has worked to improve Windows 10 privacy settings under the scrutiny of European privacy regulators, who weren’t satisfied with how Microsoft informed consumers about what data it was collecting from them.

Microsoft is encouraging customers to review their Location privacy setting and notes that both the Diagnostic data and Improve inking and typing settings have been “updated to [their] lowest setting to ensure your device has the most privacy-friendly setting”.

Additionally, Microsoft rolled out a new update for Windows 10 version 1809 with dozens of quality improvements and bug fixes.

The update bumps up version 1809 to OS build number 17763.592 with fixes for Edge, the command line tool cmd.exe, the Calculator app, and the Your Phone app.

There are also fixes for glitches in mouse behavior, a non-response UI under certain conditions, and a weird bug that caused a loss of audio if Windows hadn’t been restarted for more than 50 days.

There are also a few security-related improvements and fixes. There was an issue that prevented Windows Information Protection from enforcing encryption on a removable USB.

Finally, it fixes a lingering bug affecting Realtek Bluetooth devices from pairing after installing the May 14, 2019 update.