A high-tech border wall with Mexico? Not really a good idea either
Opinion: Technology is an attractive answer, but it’s no panacea for economic and geopolitical problems at the border.
Read more: https://zd.net/2TkB5rf 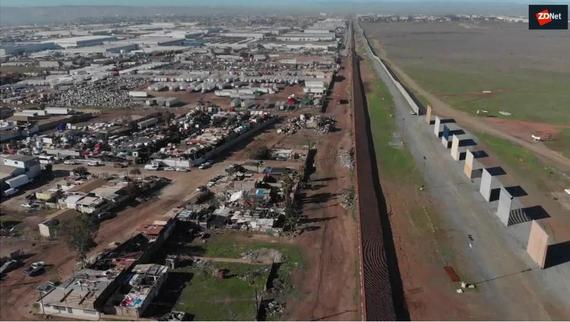 There’s a loud and growing chorus of opposition to a physical border wall. That view is shared by leaders of border cities like McAllen, Texas, by every congressman representing a district along our 2000-mile-long southern border, and by the majority of Americans (to say nothing of a long list of bygone societies stretching from the Ming Dynasty to East Germany). Tying a partial government shutdown to funding for the wall has also been deeply unpopular, and the president’s historically low approval ratings were slumping further during the shutdown.

Out of the political jockeying during the longest partial government shutdown in American history, there’s one idea everyone seems eager to agree on: Technology can help redress serious problems at the border. It’s an attractive, almost magic-sounding solution, lending a Silicon Valley ring to a stale debate. In the rhetorical shoving match over a physical wall, it’s become the rallying cry for those seeking sensible alternatives.

Unfortunately, border technology is not the panacea many people think. And in many of its applications it runs counter to our core values.

Increasing border security with a force field of sensing and response technology, what many are calling a digital or virtual wall, isn’t a new idea — in fact, it’s about 50 years old and grew out of strategies and technologies first developed during the Vietnam War. And it hasn’t worked.

There are currently about 12,000 motion and seismic sensors along the U.S. border with Mexico, along with a vast electronic perimeter of radar and high definition cameras. Predator B drones have extended the radar net in places and can pick out a snake slithering through brush a mile away. Miniature facial recognition drones, 3D mapping technology, tethered blimps first developed to guard forward operating bases in Afghanistan, tunnel-navigating ground robots used in Iraq, invisible dyes dropped from the air to mark migrants, and acoustic deterrents of various types have all been tested or deployed along the border. (Here’s an excellent article on the history of this technology buildup by Lauren Etter and Karen Weise.)

Meanwhile, electronic fingerprinting has been in use by immigration enforcement officials since the 1990s to track the massive flow of people, legal and illegal, across U.S. borders. Border security agents currently have access to military-grade technology like nightscopes, suppressors, infrared and holographic sights, and a thick catalog of tactical weapons and gear.

We’re not talking about small-scale pilot programs or testbeds, either — far from it. In the mid-2000s, the America’s Shield Initiative and Integrated Surveillance Intelligence System cost taxpayers billions. The objective was “to use the right technology at the right places for the right terrain to … have the rapid response capability to get to the points of intrusions to increase our overall apprehension rate,” CBP Commissioner Robert Bonner told the House Appropriations subcommittee on Homeland Security in 2006.

Soon after, George W. Bush kicked off the Secure Border Initiative, what he called “the most technologically advanced border security initiative in American History.” And just this past March, the latest government spending bill allocated $400 million for border technology. During what’s become a perennial state of frenzy over illegal immigration, it’s safe to say there’s been a decades-old gold rush to bring tech to the border. Rather than promoting new technology development, battle tested technology has migrated over from the defense sector. Contractors are reaping the benefits.

And what are the results of all this technology on immigration? Well, here’s how President Trump feels: “We can’t have people pouring into our country like they have over the last 10 years.”

Scrutinizing that assertion through the lens of reality is an exercise in confronting just how bellicose and misinformed the immigration debate has become, but the important takeaway is that a lot of people believe there’s still a big problem at the border despite the massive investment in technology. Maybe it’s time to reevaluate our faith in a digital fix. Maybe it’s also time to reevaluate the problem.

The reality is that technology, while part of the equation for sensible immigration management and border security, can only do so much. Squaring off against the indomitable human drive for survival, a better life, or economic gain (oftentimes all three), even the most cutting edge deterrent and detection technology is bound to falter. It’s beyond troubling that the one group of migrants on the rise as this debate continues is families, with record crossings for that group in recent months. For many, migration is about desperation.

Given that context, it’s not primarily a security crisis we’re talking about, but a humanitarian crisis. And combatting a humanitarian crisis with technology designed for the battlefield is not sensible. It’s certainly not the panacea many people across the political spectrum — and recently Democrats have been just as keen to champion border technology as Republicans — would hope.

None of which is to say technology doesn’t have an important role to play alleviating massive problems with U.S. immigration, just as immigration has a critical role to play in the competitiveness of the American tech sector. (In fact, the tech community has been one of the major losers in this trumped up war against immigrants.) I’m all for putting our brightest minds to work on these pressing issues.

Fortunately, some progress is already being made. Right now, technologists in the federal government are tackling one of the biggest challenges to the national immigration infrastructure: a backlog of nearly 750,000 asylum applications. And as Katharine Schwab points out in Fast Company, a new generation of technology startups is taking dead aim at the byzantine maze of immigration bureaucracy. One of those startups, Boundless, is helmed by an immigrant.

But inevitably technology will only be part of the answer to an economic and geopolitical problem as dynamic as international migration. Healthy immigration and true security at the border require deft political, economic, and diplomatic leadership, not quick fix solutions. The worst thing we can do is act rashly and out of accordance with our deepest values as a society.