i-voting? Estonia can teach the world a few lessons
In this month’s Estonian parliamentary elections, a whopping 44 percent of the ballot was cast using e-voting.
Read more: https://zd.net/2HrnUlf 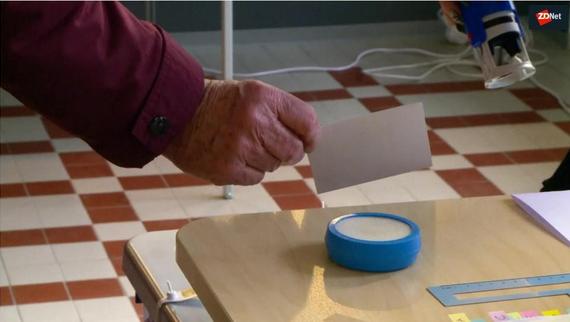 While many western Balkan countries are only in the early stages of developing their digital economies, a few have been taking bold steps.

Take, for example, North Macedonia. By teaming up with payments giant Mastercard, it is set to become the first country in the region to implement digital identities, emulating tiny Baltic state Estonia, which has had some success in this area.

The digital identities initiative that Macedonia is implementing with Mastercard for its citizens will allow them to, say, obtain documents from public institutions or open bank accounts without physically being there. At the moment, those things sound like science fiction to many Balkan citizens.

According to the company’s representatives, North Macedonia already has all the necessary infrastructure and regulations in place. The company is investing around €3m ($3.37m) in the project, and expects services to become available as early as the end of the year.

“With this service, [citizens] can use a digital identity for public services, while maintaining control of their information with security, privacy, and trust,” Ajay Bhalla, Mastercard’s president of cyber and intelligence, said in a statement.

North Macedonia information society minister Damjan Manchevski added, “This means you will no longer need to use flash drives, tokens, paper documents, or have a physical presence for the institution to identify you.”

The project should bring many advantages, but significant challenges remain. Bringing together governance, technology providers, banks, and mobile network operators is critical for the project to work.

As to the security of the system, Mastercard reckons it has taken all necessary steps to ensure that personal data won’t be misused.

“We went through rigorous testing of the biometrics. What’s important is that the system does not store information about people. This means that there is no database that can be hacked,” Mastercard’s vice president for digital identity products, Charles Walton, said.

According to cybersecurity experts, projects of this magnitude always face myriad challenges.

“The biggest challenges could come up if there is a lack of education among the staff who implement the project and handle sensitive data of this kind,” Belgrade-based cyber forensic specialist Andrej Petrovski tells ZDNet.

“However, what is good is that the state isn’t doing this alone, and they will work with a strategic partner like Mastercard. They will be able to provide all the necessary expertise for the implementation of the project.”

Experts also note that while the digital identities are a long-awaited step towards comprehensive digitization in the country, following the example of some eastern European countries, the minimum security standards for handling sensitive information have to be met.

By some estimates, the digital identity market was worth approximately $13.7bn in 2019. By 2024, it could reach up to $30.5bn. By becoming active in this field, North Macedonia is hoping the technology will help boost its weak economy.

As ZDNet has reported, in the four and a half years since Estonia launched its e-residency program, while the country spent around €8m ($9m) on the project, it managed to earn over €18m ($20.22m) from it in taxes and fees.

In terms of what could be achieved in North Macedonia, Mastercard hopes that the project could even surpass the Estonian one.

“It can reach that potential and more, in the sense that Mastercard is not doing this locally, but as a part of a global initiative. It can even leapfrog what’s done in Estonia by the very fact that we will be globally interoperable,” Walton explains.

The North Macedonia project also closely aligns with the company’s cooperation with the French government on digitization, and strategic collaborations with educational and government institutions in Australia, such as partnerships with Australia Post and Deakin University.