In this tutorial, I will show you step-by-step how to create a token with less than 10 lines of code, using Truffle plus Open Zeppelin smart contracts, and deploy it to the RSK testnet.

RSK is an open source platform for Ethereum compatible smart contracts based on the Bitcoin network.

Here is a summary of the steps to be taken to build our token:

Steps 1 to 5 are explained in detail in the tutorial link below:

All the requirements are explained in detail in the tutorial link below:

Inside the folder token, do the steps below, following instructions from the tutorial

Open the project in VS Code or other editor from your choice.

In the contracts folder, create a new file named Token.sol.

This smart contract is a mintable ERC20 token. This means that, in addition to the standard ERC20 specification, it has a function for issuing new tokens.

Copy and paste the following code:

Let’s review the above code.

To create our ERC20 Token, we will import ERC20Mintable from Open Zeppelin. This library itself imports several other libraries such as SafeMath.sol, the standards for this kind of token, and the capability to mint tokens.

Inside the token, we define some basic information about the token: name, symbol, and number of decimals for the precision.

To inherit the library’s attributes and functions, we simply define our contract as a ERC20Mintable using the is keyword in this way.

This is the final result:

In your project folder, use the command below into the terminal: 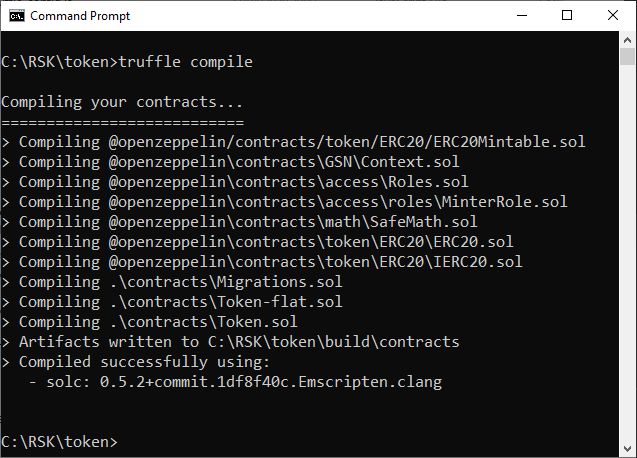 First of all, we need to create a new migrations file where Truffle will find it, containing instructions to deploy the smart contract.

The migrations folder has JavaScript files that help you deploy contracts to the network. These files are responsible for staging your deployment tasks, and they’re written under the assumption that your deployment needs will change over time. A history of previously run migrations is recorded on-chain through a special Migrations contract. (source: truffle: running-migrations)

In the migrations folder, create the file 2_deploy_contracts.js

Copy and paste this code.

In your project folder, run this command:

Wait a few minutes while the transactions for the smart contract deployments are sent to the blockchain.

The migrate command will compile the smart contract again if necessary. 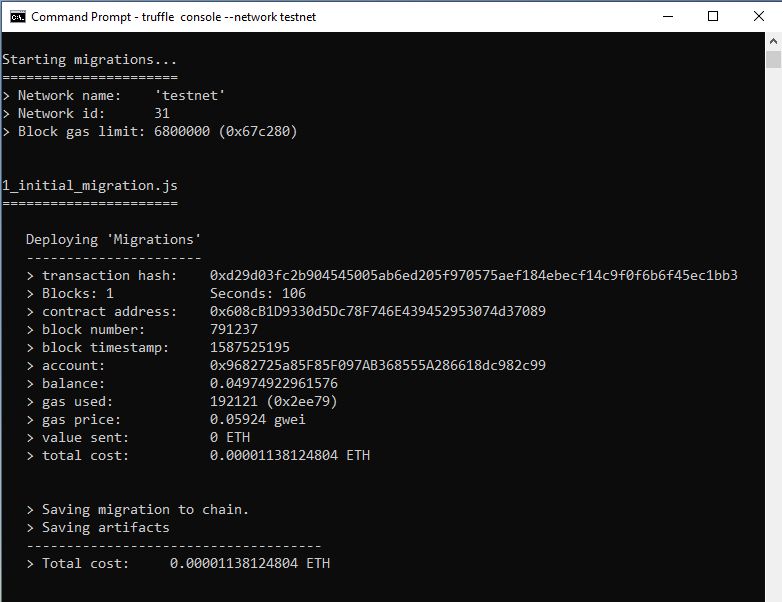 This is the transaction:

And then it deploys our smart contract Token.sol: 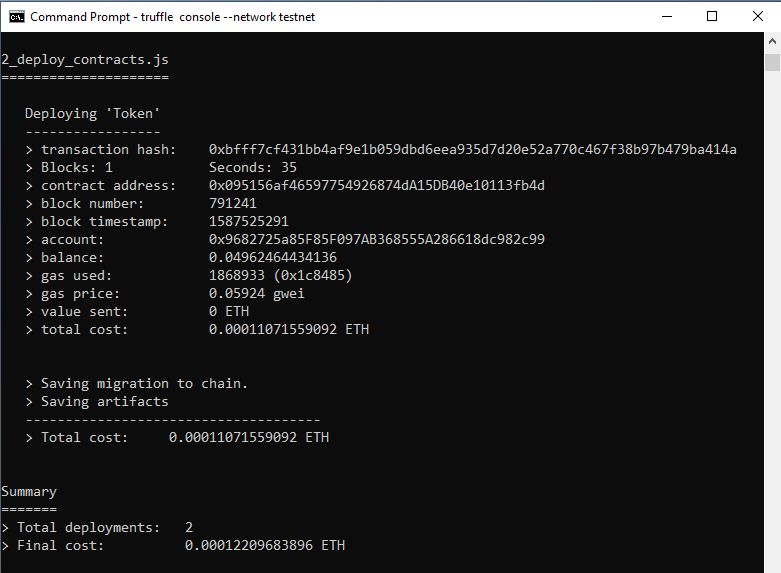 This is the transaction:

My RSK Token is now published on the RSK Testnet.

Save the contract address of token, it will be used shortly:

In the tutorial example:

Go to the Truffle console, connected to RSK Tesnet.

In a new terminal, inside the token folder, run this command:

It takes a little longer to establish this connection when compared to the local node. This will open a new console.

In the Truffle console, enter:

Connect with your token

In the Truffle console, run this command:

Confirm if our instance is OK.

Enter the instance’s name: token, then ., without space hit the TAB button twice to trigger auto-complete as seen below.

This will display the published address of the smart contract, and the transaction hash for its deployment, among other things, including all public variables and methods available. 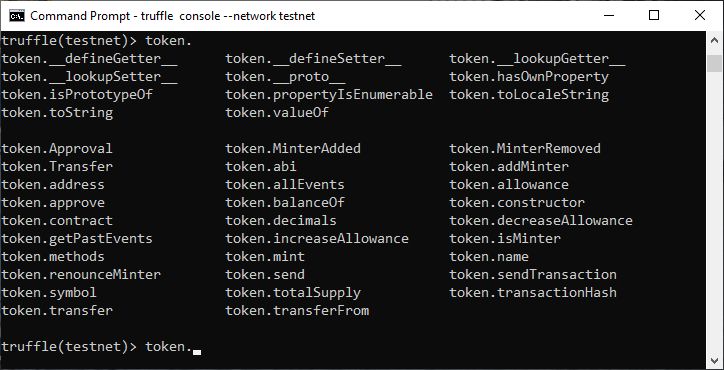 To check if we have tokens already minted, call the totalSupply function:

The returned value is 0, which is expected, since we did not perform any initial mint when we deployed the token.

The returned value is also 0, which is expected, since we did not make any initial mint when we deployed the token, and by definition no accounts can have any tokens yet.

This command sent a transaction to mint 100 tokens for account 0. 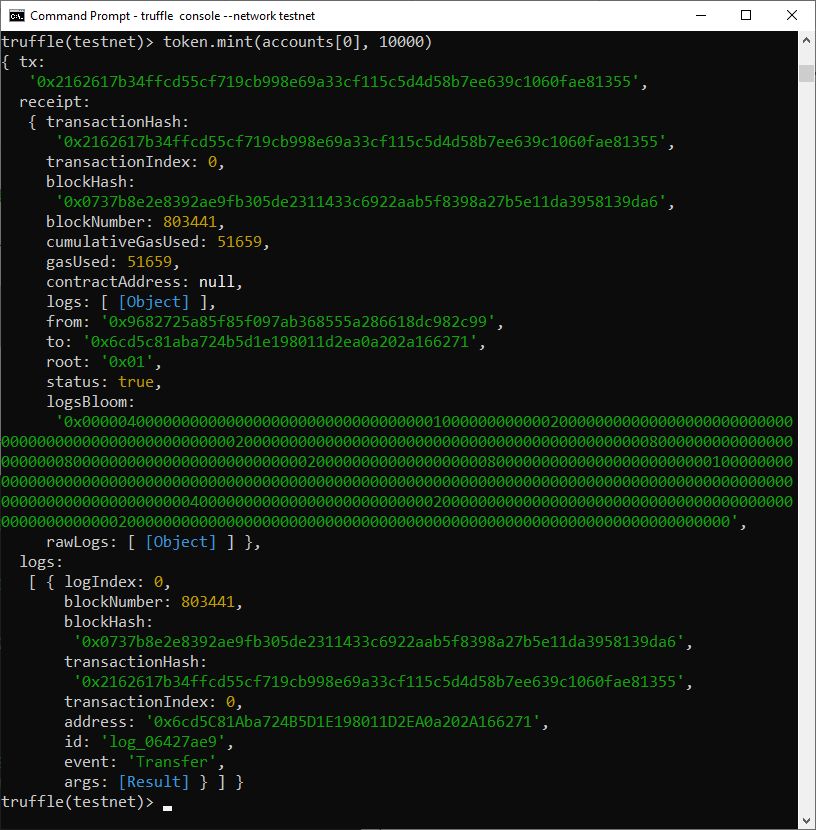 To verify the transaction in the explorer, visit:

You can mint tokens for other accounts, for example, account 1:

The returned value is 10000, which is 100 with 2 decimal places of precision. This is exactly what we expected, as we issued 100 tokens

Run this command to check the total supply again:

The returned value is 30000, which is 300 with 2 decimal places of precision. After minting 100 tokens for 3 accounts, this is perfect!

Account 2 had no tokens before the transfer, and now it should have 40. Let’s check the balance of account 2:

I showed you how to connect Truffle to the RSK network and deploy your own token with only 7 lines of code! Also, I hope that you saw how simple it is to use the Open Zeppelin libraries and that they work on the RSK network.

Our goal is to join forces and give options to people who believe in smart contracts based on Ethereum, and also believe in the power of Bitcoin, through RSK.

I hope this tutorial has been helpful and I’d appreciate your feedback. Share it if you like it 🙂