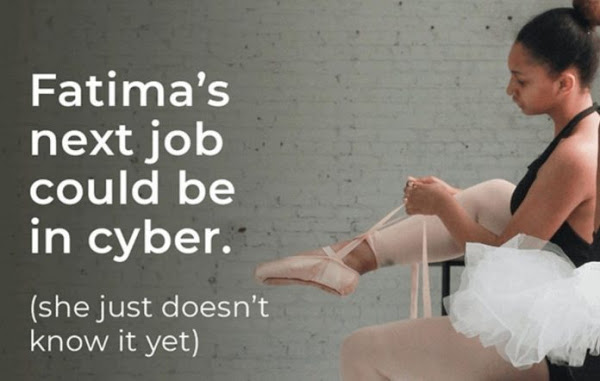 A campaign originally meant to draw in more individuals to career opportunities in cybersecurity has gone under hefty analysis and criticism which ultimately resulted in it being removed completely after just a couple of hours of its release.

Part of the government’s Cyber First mission, the advertisement shows a young lady tying up her ballet shoes with the caption being “Fatima’s next job could be in cyber. (she just doesn’t know it yet)” with the slogan “Rethink. Reskill. Reboot.”

At first, it was quite unclear regarding who was behind this campaign, with it including the branding of DCMS and NCSC’s Cyber First Campaign. Secretary of State for DCMS Oliver Dowden however dismissed any association with the campaign, saying “this is not something from DCMS” while agreeing that “it was crass.”

The poster though, one of a few which highlights individuals from a wide variety of different professions has been vigorously criticized on online media.

Javvad Malik, a security awareness advocate at KnowBe4, said the poster did come across as tone-deaf.

“With any career, you want to pull people towards it and motivate them to want to choose it,” he said. “It’s only when people enjoy, have an interest in, or have a passion for a role that they actually have a sense of achievement and contentment.

The Prime Ministers official spokesperson stated: “This is part of a campaign encouraging people from all walks of life to think about a career in cybersecurity. However, this particular piece of content was not appropriate and has been removed from the campaign. The government recognizes the challenge to the cultural industry and today the culture secretary has announced £257m of funding to help support 1,385 theatres, art venues, museums, and cultural organizations across England.”

This move comes after the chancellor denied empowering laborers in the already struggling arts industry to retrain.

Rishi Sunak has although insisted that this was a general statement made by him about the requirement for some workers to “adapt” and recommended there would be “new and fresh opportunities” accessible for the individuals who couldn’t do their old jobs.