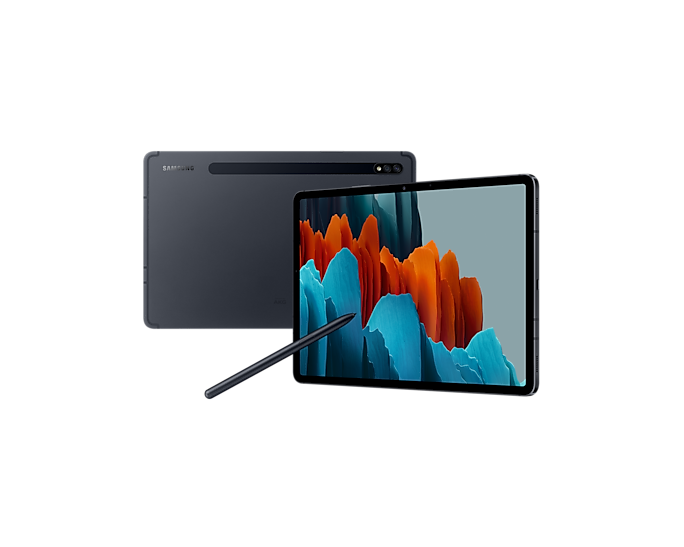 Computer Science student at the University of Bristol. Web Designer and Maths/CS Tutor.

Last week, I finally gave in to the temptation to buy Samsung’s latest flagship tablet – the Tab S7. This is the first time I’ve owned a tablet in years, so I’ve been very excited to start using it! In this Samsung Galaxy Tab S7 review, I’ll talk about how I’ve found the tablet to use, and my thoughts on some of the decisions Samsung has taken.

The Samsung Galaxy Tab S7 was announced on August 5th, 2020 and released on August 22nd, 2020. As one of the newest tablets on the market, it offers a lot of value for those looking to buy a tablet sometime soon.

The Tab S7 is a masterpiece in terms of design. It’s light, versatile, and very aesthetic. You can hold the tablet in either hand, at any angle, and it always feels just right.

If you have the keyboard book cover (which I would definitely recommend), you’ll be able to quickly jump from an on-the-go tablet to a desktop workstation. Of course, it’s no real rival to a Windows PC/Mac, but it sure looks the part.

The S Pen – which comes free with the tablet – magnetically attaches to both of the longer edges of the tablet, and to its wireless charging pad on the back panel. That back panel, by the way, has a cover which flips over the pen so it can’t be knocked off whilst charging. Genius.

Samsung’s spin on Android 10 on the Galaxy Tab S7 is absolutely fantastic, with great features exactly where you need them. The settings menu is absolutely full of customisation and personalisation options, and the S Pen interacts brilliantly with the tablet.

With a simple flick of the pen, you can launch apps, control media, and take screenshots. You can even set the tablet to jump into Dex mode (more details below) as soon as you connect the keyboard.

Multitasking on the Tab S7 is also great – with split-screen apps, pop-up notifications and even window-style apps you can drag around.

Some of the more flashy features do feel slightly gimmicky, but most of them are genuinely useful and help me use the tablet effectively every day.

The Specs on the Tab S7 are very impressive on paper, and even more impressive when you’re using it! With 6GB of RAM and the latest Octa-core Snapdragon 865+, you’re getting an absolute beast in terms of raw processing power. Add in one of the best graphics units around, the Adreno 650, and you’ve got a tablet which can run virtually any task (or many) extremely fast.

The Tab S7 also comes with a really handy fingerprint scanner on the power button, on the top edge of the tablet. It’s seriously quick, accurate and well-placed so it’s easily accessibly however you’re holding the tablet.

Throughout my review of the Samsung Galaxy Tab S7, I found the display screen nothing short of incredible. With an 11 inch, 2K 120Hz LCD screen, you are getting a crisp and fast display which has so far handled everything I’ve used brilliantly.

YouTube and Netflix both look fantastic, and whilst I’m not a huge gamer, I’ve noticed that games like Asphalt 9 are seriously impressive on the Tab S7.

With a massive 8,000mAh battery, this tablet will easily get you through the day without needing another charge. I use mine for several hours a day, often with a bright screen, lots of apps running, and split-screen working. However, I haven’t once needed to plug it back in during the day.

Shipping with a 15W charger, which I’ve found to be reasonably fast, you definitely won’t struggle with battery on this device. If you do need that extra boost though, the tablet also supports Samsung’s 45W charger which will charge it up significantly faster. That’s not an investment I’ve felt the need to make just yet though.

The one criticism I’d have though is that it’s often a little impractical to get your full face in the shot. If you’re in portrait mode, the camera is on the side and halfway down, so just totally in the wrong place. If you’re in landscape mode, the camera is in the right place but it has a fairly narrow angle, so often doesn’t capture as much as I’d like. Perhaps I’m being pedantic.

I’ve never understood the necessity for a great rear camera on tablets. We practically all have a beast of a camera in our pockets, so why would we want to take photos or videos on a much bigger and heavier tablet?

Regardless, the dual rear camera on this tablet is pretty good, with a 13MP main lens and a 5MP ultra-wide lens. It’ll take clear and colourful pictures but it’s not the best camera you’ll find on a mobile device – but as I’ve said, that’s not a big deal for me.

Dex mode is one of the biggest selling points for the Tab S7. It’s a desktop-like mode with draggable windows, a taskbar and full trackpad/mouse support. You can set Dex to launch automatically when you plug in your keyboard – which is a nice little time-saver.

However, Dex does come with its problems. When you’re in Dex mode, often certain apps will pop up with an on-screen keyboard every time you need to type – even though your physical keyboard is connected – which is not easy to get rid of constantly.

Also, when switching between Dex and tablet mode, sometimes media will stop playing and apps will behave a bit weird. I’d definitely recommend only switching after you’ve closed & saved anything important.

Overall, Dex is a really useful feature which makes using the Tablet with the keyboard really efficient, but it’s definitely not competition for any laptop or notebook yet.

Samsung Galaxy Tab S7 Price: Is it worth it?

Currently on offer for £549 in the UK (around $527 USD on Amazon US) at most retailers, the pricing for the Tab S7 is really competitive.

The tablet has certainly been a brilliant addition to my setup – serving as a great note-taker, video-player and all-round awesome mobile computer. It’s great for both work and games, with the tools, software and accessories to do everything you could possibly want from a tablet.

If you’re looking to buy a tablet – and you can put up with the minor bugs with Dex, the Tab S7 is definitely a fantastic choice at a price far better than you’ll find for any other high-end tablet.