Robots for kids: STEM kits and more tech gifts for hackers of all ages


All the signs were there. If my parents knew then what parents know now, they would have been prepared. But back in the 1960s and 1970s, the maker movement was still far in the future. Robots were something you only saw in movies and awesome TV shows (or as my Mom would often put it, “What in the world are you watching?”). Telling her that Lost in Space wasn’t “in the world” tended to get me the All Powerful Glare of Motherly Annoyance.

But now, if a kid is a natural tinkerer, there are positive outlets for their inclination. There are great STEM (science, technology, engineering, and mathematics) kits and toys that can ignite a kid’s interest and focus it on learning, while at the same time making learning fun.

In this guide, we’re focusing mostly on the technology and engineering areas, providing you with some great kits and toys that teach and inspire programming and making with robots and digital technology.


If you’re talking about robotics and kids, the very best place to start is Lego. Lego has long been an innovator not only in the maker space but in robotics as well. In this guide, we kick off our exploration of goodies for geeky girls and boys with a Star Wars-themed robotics kit.

Kids can build use more than a thousand components to build R2-D2, a Gonk droid, and a Mouse droid. Then, with an app, they can program these fan favorites with a variety of different easy-to-access programming and learning tools.


Kids build their own computer 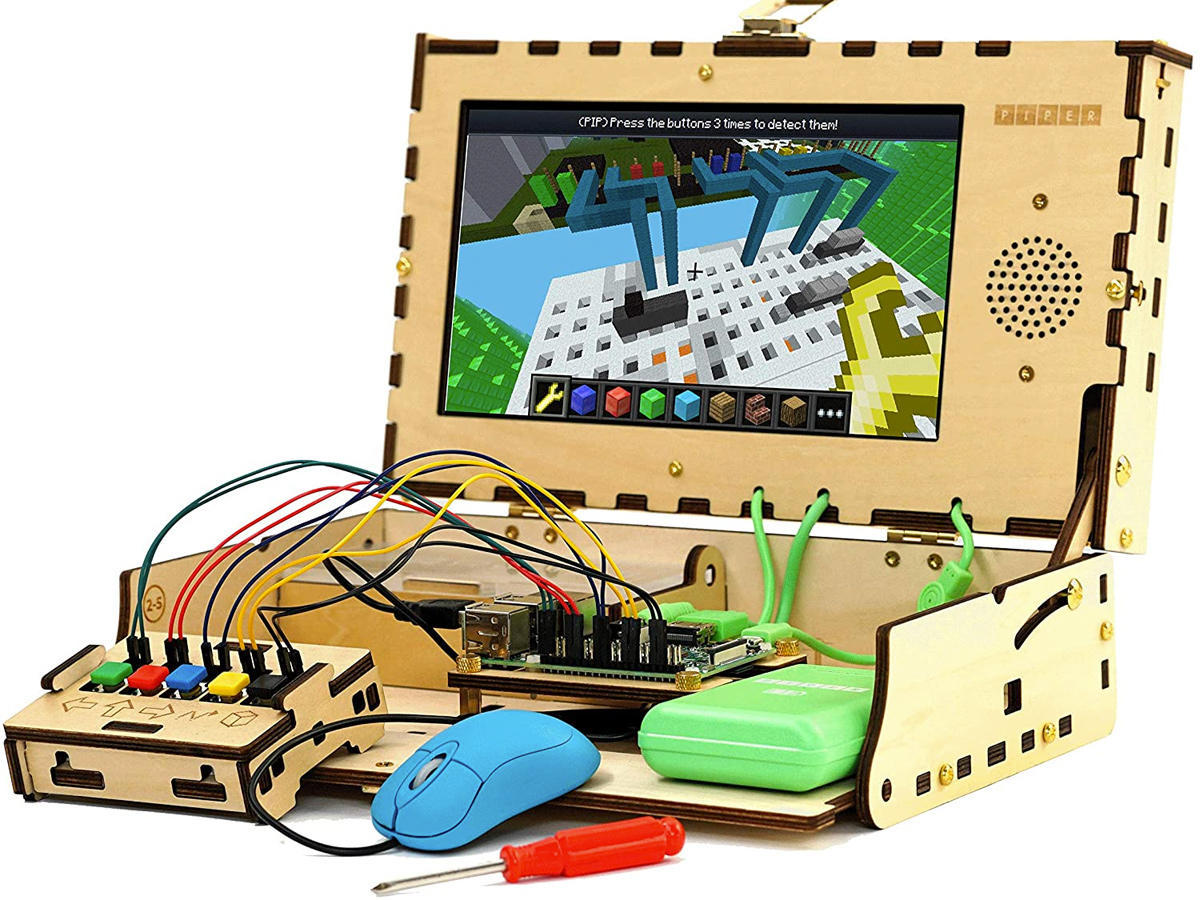 
OK, I love this thing. You’re probably going to notice me saying that a lot during this guide because I was the kid this stuff was made for. I would have been so excited had I been given this kit.

Here are the details: Your kid puts together their computer, complete with circuit connections (no soldering required) and case assembly. Then they can use the Raspberry Pi to learn and play. But you know what will fire up your kid: there’s a Raspberry Pi Mindcraft edition kids can play right on this machine. It even includes a display and a mouse.


Play with code without a computer 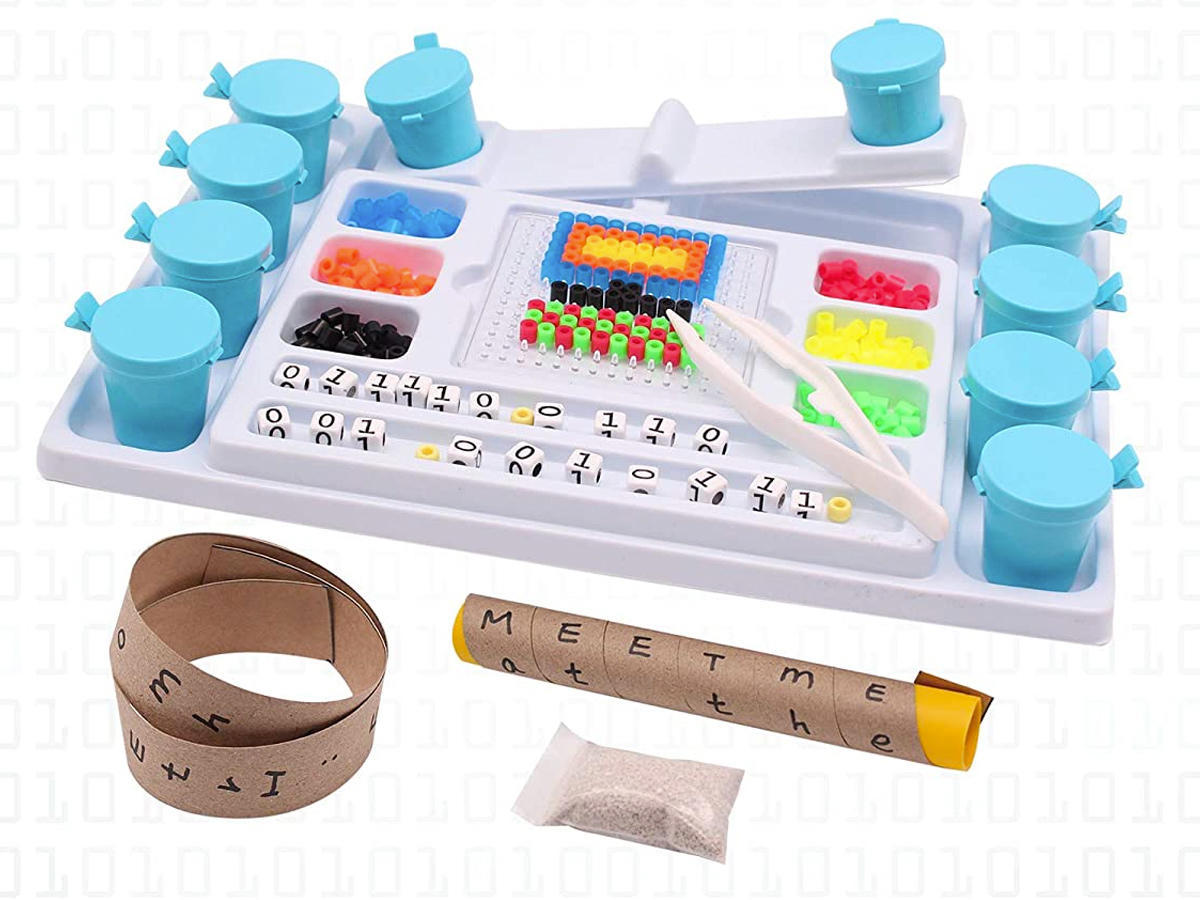 
I love this thing, too! First, it allows you to be geeky even if you’re on a camping trip or have a power outage. So, if you’re living through an apocalypse (what? too soon?) and still want to teach your kid to code, this is a great place to start.

Computer science and coding revolve around some basic guidelines and theories that are common across all computing. This kit shows how that works, from the basics of encryption (where your kids can make an actual cypher mechanism) to sorting algorithms. If you want your kids to get some away-from-screen time and still learn what they’re fascinated by, this is a good buy.


Learn the basics of mechanisms 
Not only do I love this thing, I want it. Yes, even now. And not just because my wife says I sometimes have the emotional maturity of a five year old.  I want it (and so will your kid) because it shows how to make things that have mechanical properties.

Here’s the thing: If you want to make something that has a linkage, a connection, a joint, or moves as part of its operation, you need to understand these concepts. This Lego-clone kit shows you how to do just that, and as a bonus, it’s under $30. 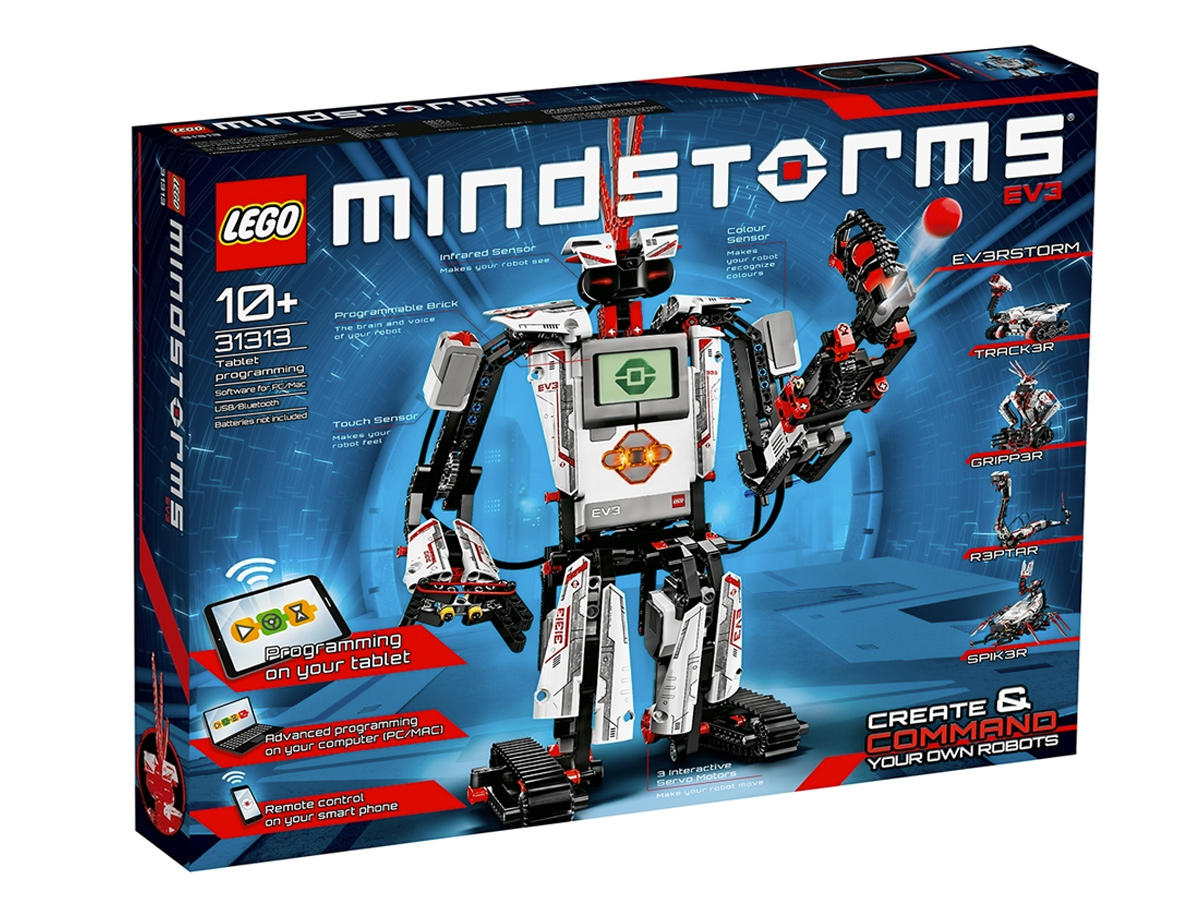 
I have the previous version, and I’ve built all sorts of cool programmable machines. I often use this for prototyping ideas before I decide to fabricate a more robust unit out of wood, metal, or plastic.

This is an amazing kit. It is pricey, but you get a complete robotics building experience with very few limitations. If you can budget for it, it’s definitely a gift to buy for yourself, er, your kid. Yeah, for your kid. Or buy it for yourself and get your kid a stuffed animal. That’s what I did. Of course, my kid is an 8-pound dog and he hates robots, tech, and plastic. My dreams of building him a robot car were completely dashed by his Luddite level of disinterest*, so I had to use this for other fun projects.

*Yes, we definitely see the irony in that an uber-geek’s dog, named Pixel, is completely anti-technology. But we love him so very much anyway. 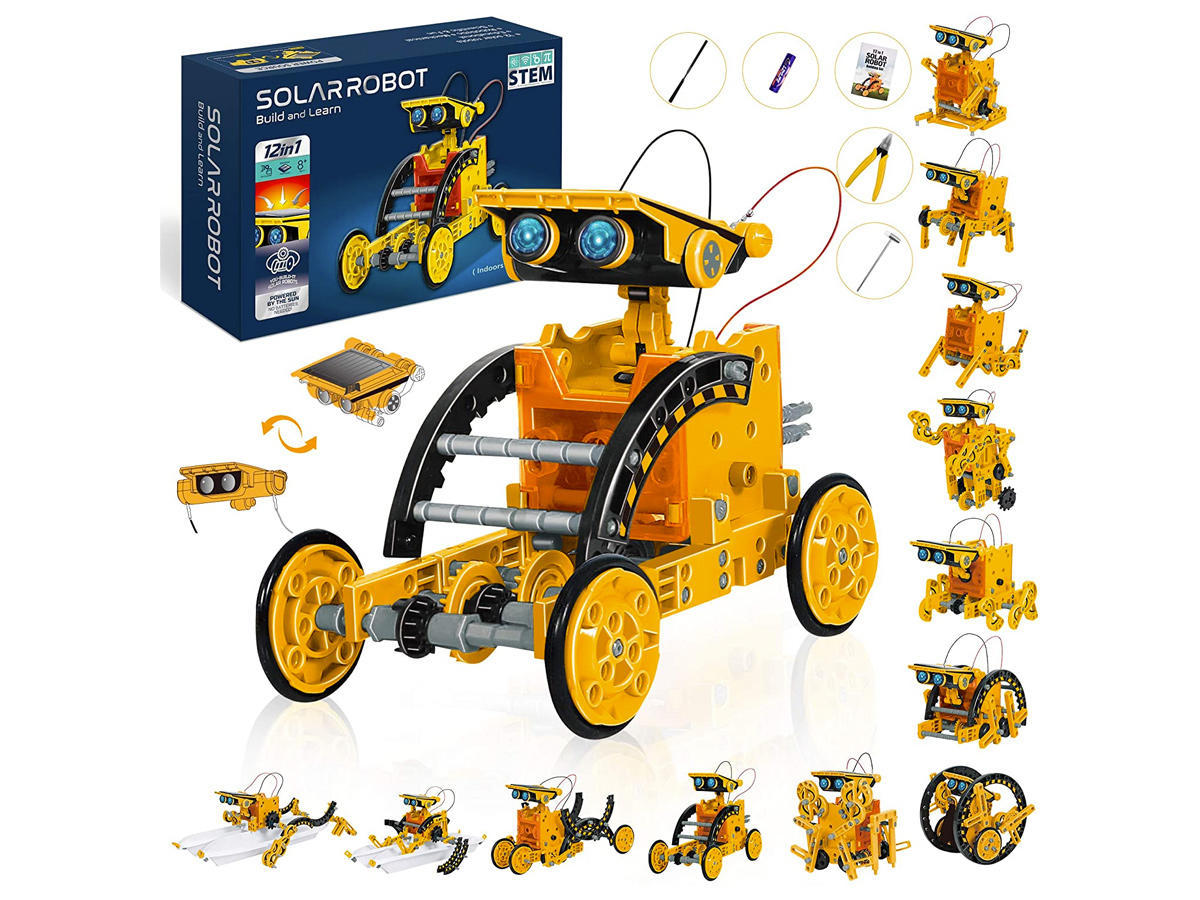 
If you had fun with LEGO or Erector (Meccano for those of you outside the US), this toy will be familiar. It’s not technically a robot because it has no autonomous or even remote control, and no programming. But your kid can put it together, learn about how gears work, hook up the solar panel and learn a bit about sustainable energy, all the while having a blast. 
I have a couple of Sphero robots, including the BB8 version. And yes, I did buy it because I thought my little dog would have a blast chasing it, but Pixel doesn’t like it at all. Kids will, though, because — especially with this model — it’s app-enabled, allowing all sorts of interesting programming and experimenting.

Don’t discount the value of a ball as a programmable device. It can easily go up and down carpets, it’s small enough to make it through relatively narrow gaps, and it’s maneuverable as heck. It’s even waterproof.


Arduino kit with lots of parts 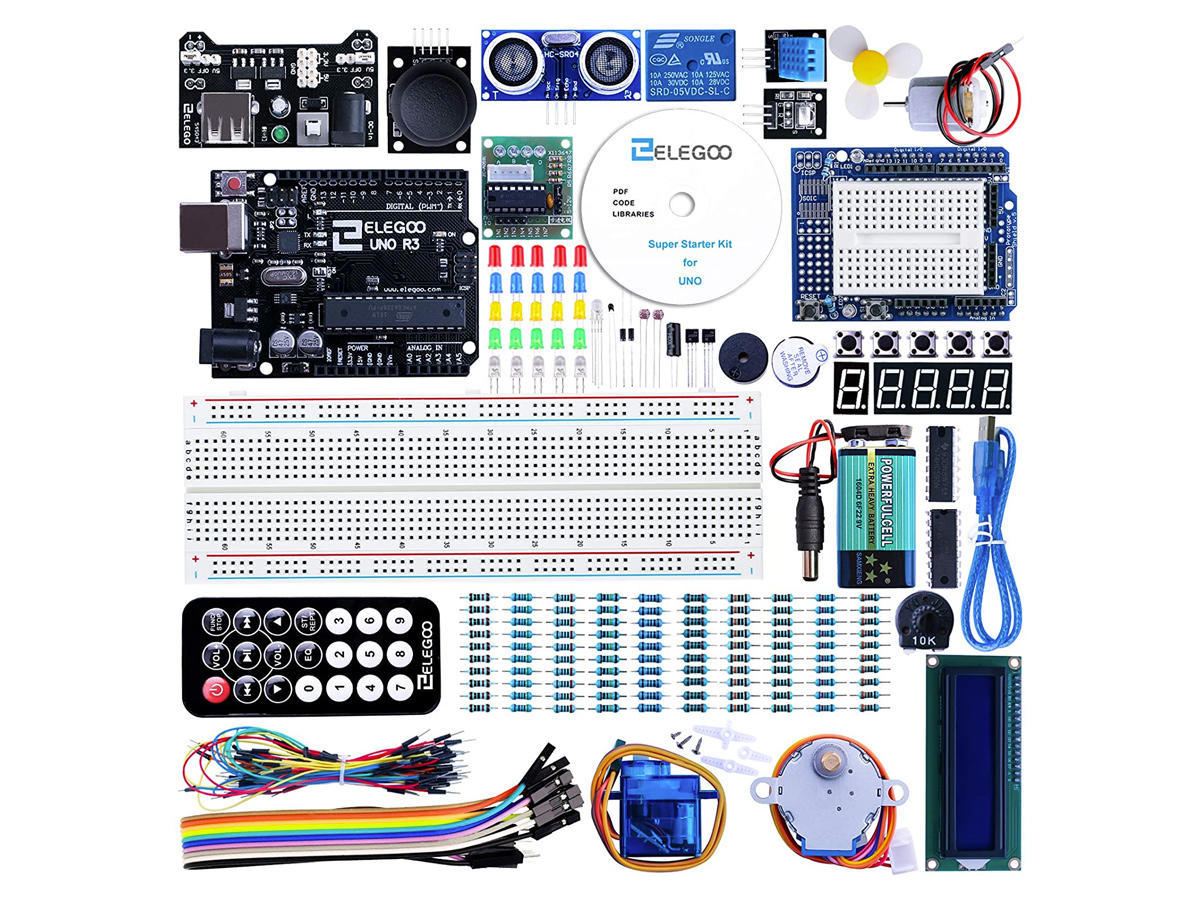 
I’ve bought three or four of these for myself over the past few years, mostly as a way to have a wide selection of parts and sensors for my Arduino projects.

This kit is not for little kids. Your kid should probably be a teenager and have some experience building things and possibly programming. The kit comes with some basic tutorials, but, to be honest, they’re not fabulous. But the selection of components is, and that’s where the magic comes. So, if you or your kid are comfortable Googling or YouTube searching for near Arduino projects and tutorials, this kit will give you the parts to make it happen. Plus, it’s under $50.


Let’s get away from plastic for just a little while 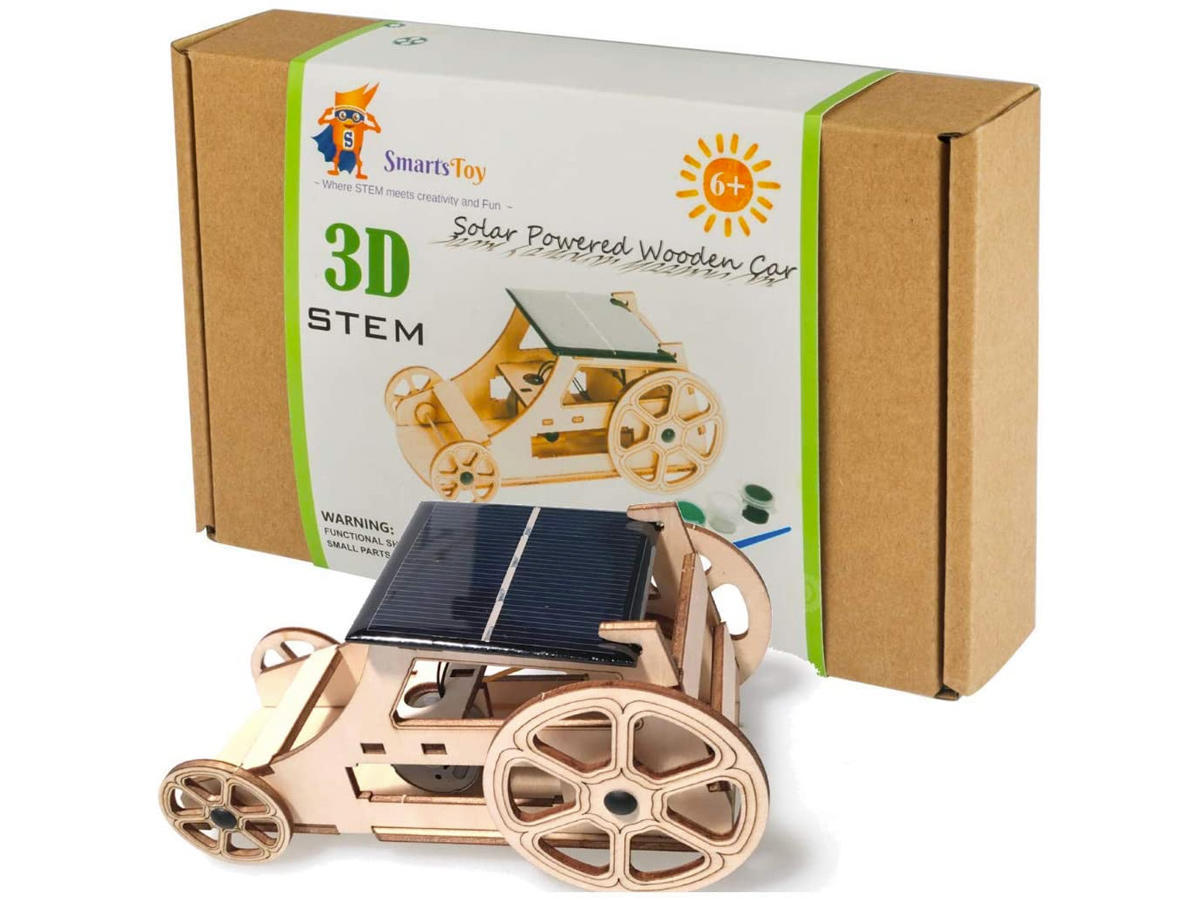 
Tired of everything being made from plastic? Want to teach your kid about sustainable materials? Consider this laser-cut solar-powered car kit. Not only is the power from the sun, but the wooden chassis is both robust and biodegradable.

You can probably just snap it together, but a little wood glue (or plain old Elmer’s) should make the car strong enough to put it through its paces.


Build a robot with a POV camera 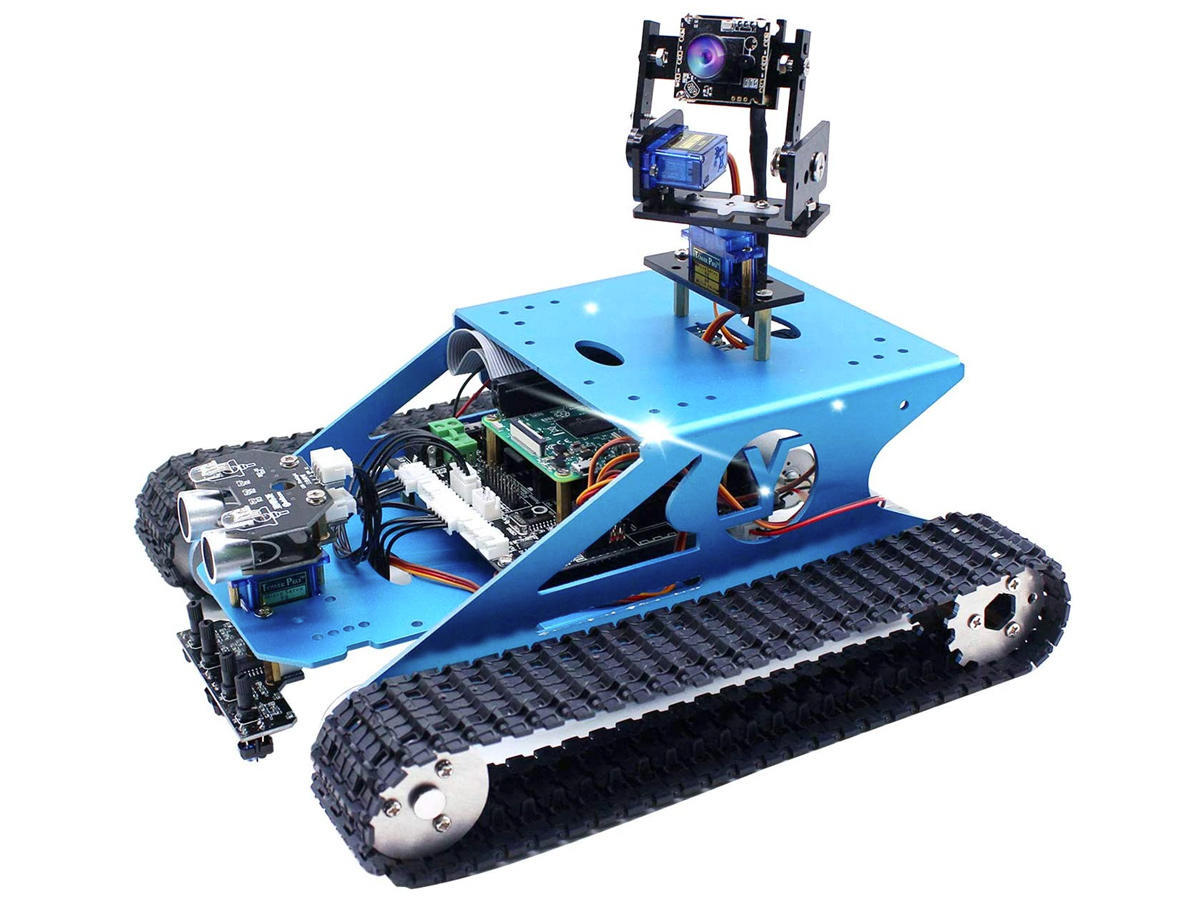 
The only thing I’m not that thrilled about with this is you have to add your own Raspberry Pi because the kit doesn’t come with one. I really think they should have listed two models on Amazon, one with a Pi and one without. That way, you’re not tasked with finding your own (don’t worry, we’ll list a standalone Pi in our next listing).

In any case, this is great because it allows you to build a roving device that your kid can drive from the point of view of the robot’s camera. That seems like it would be a ton of fun.


Put together your own little computer 
I can’t say I love this thing because it’s not a toy, but I like it. I’ve bought a bunch of these, because I use them to drive my 3D printers. While you can get a standalone Pi for about $60, I recommend spending the extra $20 to have a power source, heat sinks, fan, and case that you know will work with the Pi. It even has an HDMI cable in the kit.

If you want that $20 back and don’t mind using a board with only 2GB of RAM instead of 4GB, then this version is for you. You’re spending just about $60 and getting all the goodies.


All of DJI’s drone smarts in a robot kit 
If you want to learn robotics and have fun doing it with primo hardware, this is your toy. At more than $500, it’s not cheap, but it comes with omni-directional wheels, a laser canon, and a canon that shoots small beads (yeah, I’m thinking of Ralphie and “You’ll shoot your eye out,” too).

You can create an instant battle bot scenario with two or more of these (just in case you want to spend thousands of dollars on robot toys), but the real meat of the product is the programmability and teaching tools. There are a bunch of exercises, and you can program with either Sketch or Python. Finally, DJI includes a full series of videos, so your kid can take a video class with hands-on use of the device. It’s just so darned cool.

I used a very simple selection mechanism while looking for these toys. If I didn’t have an overwhelming desire to buy it, and it didn’t take a supreme act of willpower to not click the Buy Now button, I didn’t list it. Since my internal kid is about as wonder-filled and geeky as they come, I figured if I was excited by it, other kids would probably be as well.

Obviously, I stuck to the coding and robotics world, but I wanted to go beyond some of the classic robot toys like LEGO and provide toys that were not only of a wide range of capabilities but price points and even learning experiences. Let me know in the comments below if I nailed it or not.

Normally, in these lists, I try to provide you with guidance on how to pick the product or service you need. But you know your kids far better than I. As I mentioned, I’m a doggie daddy, so I don’t have a lot of experience with what kids these days groove on. But I’ll tell you this:Choose less complex toys for kids who have less experience and more complex toys for kids who have already built or programmed more ambitious projects.

Good luck and have a happy holiday season.

Check out our ZDNet Recommends directory or Holiday Gifts hub for some more inspiration.

Our sister sites also have the following gift guides: