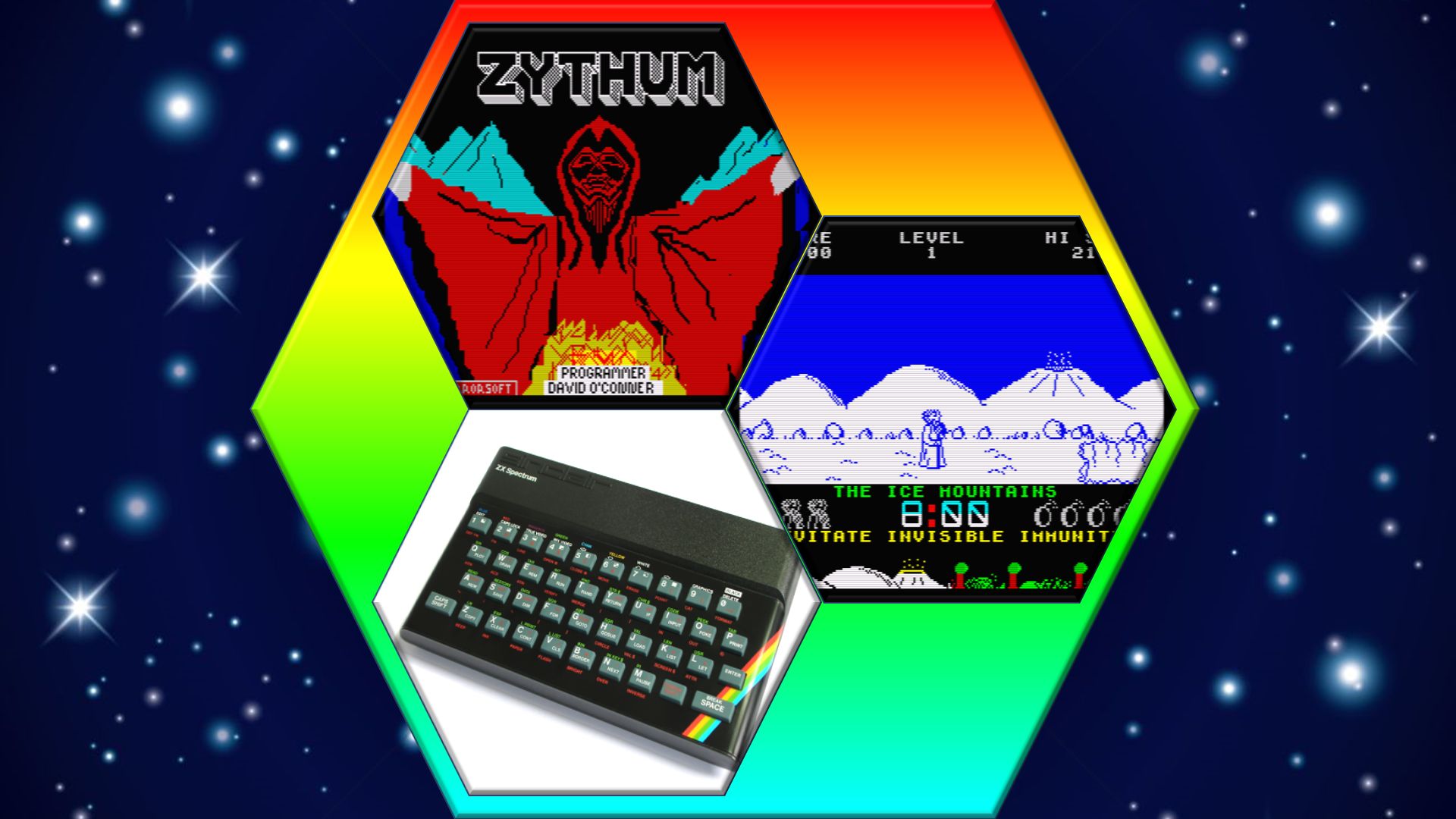 Retrogamer and Champion of the Obscure and Defenceless

“Zythum” is a game I can remember spending quite a bit of time on as a child on my Sinclair ZX Spectrum, before I got a Commodore 64 as a teenager and moving onto the Amiga in my college years. On the surface, it might seem like a typical side-scroller of the era, but when you get used to the game mechanics and see under the hood, this game is anything but typical for a platformer. 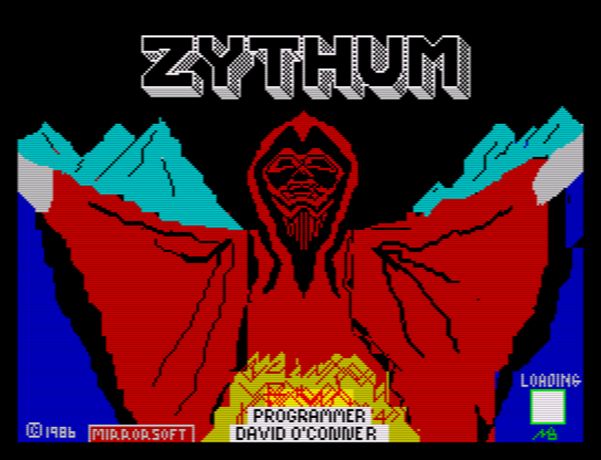 A Spectrum-exclusive platformer from 1986 published by Mirrorsoft, Zythum (pronounced “Zai-thum”) is a fun and slightly innovative side-scrolling game that makes full use of the Spectrum’s limited hardware capabilities. In this game, you assume the role of a nameless wizard who is out on a quest to obtain the eponymous elixir, believed to grant the imbiber divine powers including immortality. However, standing in our pixelated mage’s way are a variety of enemies determined to stop him in his mission.

The game is divided into four (4) levels, all of which fit comfortably into the Spectrum’s 48K of RAM, so this game will run on any Spectrum machine without the need for a multiload. The game’s quartet of geographical locations consist of:

Once the last level is completed, the game restarts from Level 1 with a higher difficulty, continuing until the player loses all their lives. 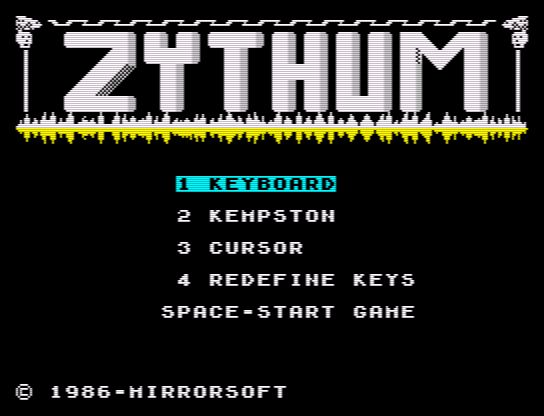 When the game first loads and runs, you are greeted with a brief fanfare-like melody played by the Spectrum’s “beeper” (internal speaker). From here on in, you can choose to play with the keyboard, a Kempston Joystick interface allowing you to use any Atari-compatible single-button joystick on your Spectrum, or the cursor keys as well as being able to redefine your own keyset. For this review, I played the game using my custom-made arcade joystick. The game uses P to pause and Q to quit to the main menu by default.

Since the ZX Spectrum had no built-in joystick port unlike most of its contemporaries (Amstrad CPC, Commodore 64, MSX, etc.), companies made their own joystick interfaces, including Sinclair themselves, which assigned joystick movements to keypresses. However, the Kempston interface is a 1:1 match of the standard (at the time) Atari protocol, which was also used by competing machines save for the MSX and other Japanese home computers. 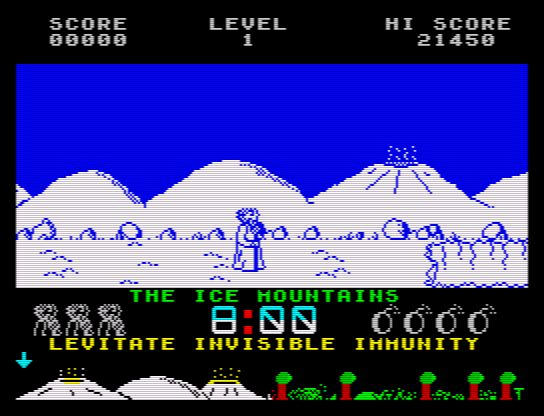 The game looks simple with its unobtrusive heads-up display (HUD) and its limited usage of colours in the main window avoids any attribute clash for which the Spectrum is notorious. The upper side of the screen is self-explanatory, showing your current score, current level and the game’s highest recorded score.

On the lower side, you have a countdown timer in the centre giving you eight (8) minutes to complete each level, and on the left and right of this timer lie icons representing your remaining lives and smart bombs respectively. The latter items are uncommon and when activated, will destroy ALL on-screen enemies.

If you are playing on the keyboard, then you can use a dedicated key to use a smart bomb, while on the joystick, this takes a little extra work: hold Down on the joystick and then press the fire button (the screen will flash when a smart bomb is used). Learning to use the smart bombs is essential to surviving in this game.

One of the game’s unique but overlooked features is the ability to perform a “momentary jump” – in other words, the height of the main character’s jump is determined by how long the jump control is held. This is one mechanic that sets this game apart from many other standard platformers, including the much-beloved Super Mario Brothers in my opinion. Learning to master this technique is critical to making progress in the game, as not only will you encounter various hazards in the forms of pitfalls and spikes (and even disintegrating mines in the later levels), once the player character is in motion while jumping, the trajectory cannot be altered. If you overshoot or undershoot a jump, then it could be fatal.

Furthermore, there are obstacles which will prevent you from jumping (such as marshes/swamps) or force you to jump at maximum height (springs/trampolines), making certain stages of the game unnecessarily difficult. However, this is to be expected for a game from this era (1986), as what constituted a fair challenge back then had not been entirely worked out and codified universally, so standards of difficulty varied from game to game. 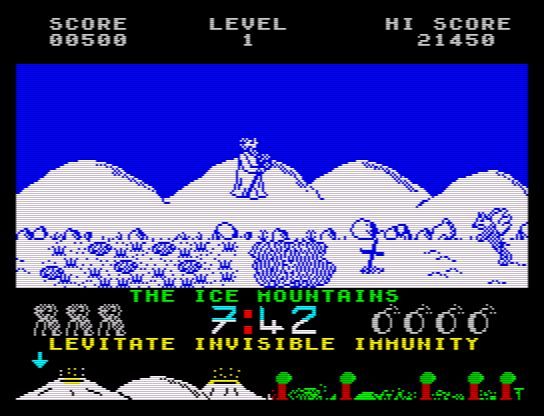 Another unique feature of this game is the ability to temporarily acquire certain spells that will either hinder or help your progress – these spells are manifested in the form of objects that can be picked up (indicated in parentheses) and are indicated by the yellow text in the lower section of the HUD as follows:

Out of these, the Invisible spell is the least useful, as it does not make you invisible to your enemies and unlike the Levitate and Immunity spells, this does not leave the screen when picked up (the middle stages of the game are abundant with this “power-down” spell).

When a spell is equipped, it will be highlighted in green. If you lose a life with a spell equipped, then you will also lose the spell. Multiple spells can be equipped simultaneously, although it is unlikely that you will be able to do so since each spell lasts approximately 10 seconds.

Your progress is tracked at the very bottom of the screen in the form of a mini-map that shows your current position – there are no bosses in this game, which may come as a surprise to gamers accustomed to tough challenges for a game of this type. Invisible checkpoints subdivide each level into quarters and are usually marked by moneybags, which give the player a score boost (this also happens when a level is completed). Scoring 10,000 points grants the player an additional life. You can have up to a maximum of three (3) lives.

The game’s presentation is one of its strengths, featuring a brief if slightly hypnotic melody at the main menu as well as a humorous game over and victory message and a high score screen that pushes the Spectrum’s limited colour palette to its limit. The game’s title screen is also evocative and even slightly daunting, as a symbol of things to come.

The graphics are drawn at a high resolution (for the Spectrum) and are easily identifiable – each sprite clearly represents what it is supposed to be and the player will also be able to tell between the various types of enemies just by appearance alone, thanks to a simplistic but detailed look for each enemy type, although the enemies are not as well animated as the main character sprite. The Spectrum’s limited colours are put to good use here, with a rainbow effect taking place to signify a smart bomb’s usage and even during the high score screen showing off the highest-ranked scorers in the game, Zythum revels in its Spectrum-exclusive roots and leaves no stone unturned.

The sound effects are extremely rudimentary as they are all generated by the Spectrum’s single-channel beeper due to it being made to fit into 48K of RAM. However, they are more than sufficient in conveying the mood for the game. The music, however, is sparse – the game only has three (3) tunes:

The controls of this game are smooth and responsive – I encountered no delay or sluggishness while playing Zythum and every movement and button press registered perfectly.

However, one MUST get used to controlling the height of the main character’s jump in order to progress (unlike games like Super Mario Brothers, where your running speed and how hard you press the button determines the height and distance of your jump). Learning to use the game’s smart bombs is also essential, so while not pick-up-and-play straightforward, the controls are easy to learn and can be mastered with some patience and practice.

The gameplay is where Zythum shines – it has the right balance of fun and frustrating, being entertaining enough to keep you going but also irritating enough to make you want to throw your joystick across the room while providing a (mostly) genuine level of challenge.

However, the game does require pixel-perfect accuracy, particularly during the latter half of the game, as the player will have no time to stop and plan their next move or attack, forcing them to continue and adapt as they go along.

This can increase the frustration factor for all players, regardless of skill level. However, the game’s stages are ranked fairly in difficulty, which balances out the challenge so that the player knows what to expect for each level. What I do not care for personally is how the game repeats itself once completed – a final, definite ending would have been nice.

Zythum is a game that can still be played and enjoyed today if you are looking for an arcade-quality game with some new tricks up its sleeve and a (mostly) fair difficulty. However, its obscurity and originality may also be just as much a deterrent to players as it is an attraction. If the usage of colour and the innovative control scheme are the game’s strengths, then the music is its weakness, as the beeper does not fully show off the Spectrum’s sonic potential.