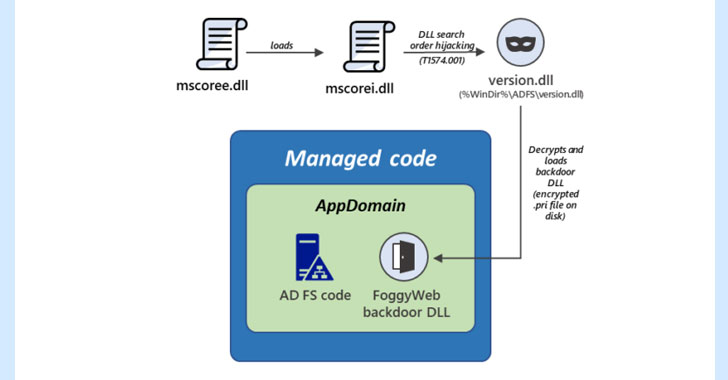 “Once Nobelium obtains credentials and successfully compromises a server, the actor relies on that access to maintain persistence and deepen its infiltration using sophisticated malware and tools,” MSTIC researchers said. “Nobelium uses FoggyWeb to remotely exfiltrate the configuration database of compromised AD FS servers, decrypted token-signing certificate, and token-decryption certificate, as well as to download and execute additional components.”

Microsoft said it observed FoggyWeb in the wild as early as April 2021, describing the implant as a “malicious memory-resident DLL.”

Nobelium is the moniker assigned by the company to the nation-state hacking group widely known as APT29, The Dukes, or Cozy Bear — an advanced persistent threat that has been attributed to Russia’s Foreign Intelligence Service (SVR) — and believed to have been behind the wide-ranging attack targeting SolarWinds that came to light in December 2020. The adversary behind this campaign is also being monitored under a variety of codenames like UNC2452 (FireEye), SolarStorm (Unit 42), StellarParticle (CrowdStrike), Dark Halo (Volexity), and Iron Ritual (Secureworks).

FoggyWeb, installed using a loader by exploiting a technique called DLL search order hijacking, is capable of transmitting sensitive information from a compromised AD FS server as well as receive and execute additional malicious payloads retrieved from a remote attacker-controlled server. It’s also engineered to monitor all incoming HTTP GET and POST requests sent to the server from the intranet (or internet) and intercept HTTP requests that are of interest to the actor.