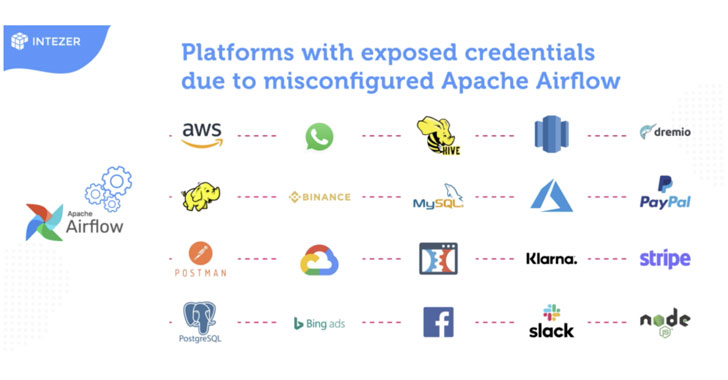 Cybersecurity researchers on Monday discovered misconfigurations across older versions of Apache Airflow instances belonging to a number of high-profile companies across various sectors, resulting in the exposure of sensitive credentials for popular platforms and services such as Amazon Web Services (AWS), Binance, Google Cloud Platform (GCP), PayPal, Slack, and Stripe.

Originally launched in June 2015, Apache Airflow is an open-source workflow management platform that enables programmatic scheduling and monitoring of workflows on AWS, GCP, Microsoft Azure, and other third-party services. It’s also one of the most popular task orchestration tools, followed by Luigi, Kubeflow, and MLflow.

Some of the most common insecure coding practices uncovered by Intezer include the use of hard-coded database passwords in Python DAG code or variables, plaintext credentials in the “Extra” field of connections, and cleartext keys in configuration files (airflow.cfg).

Chief among the concerns associated with misconfigured Airflow instances is the exposure of credentials that could be abused by threat actors to gain access to accounts and databases, giving them the ability to spread laterally or result in data leakage, not to mention lead to violation of data protection laws and give an insight into an organization’s tools and packages, which could later be exploited to stage supply-chain attacks.

“If a large number of passwords are visible, a threat actor can also use this data to detect patterns and common words to infer other passwords,” Intezer researchers said. “These can be leveraged in dictionary or brute-force-style attacks against other platforms.”

Even more concerning is also the possibility that malware can be launched on the exposed production environments by leveraging the Variables feature to modify the container image variables to point to a different image containing unauthorized code.

Apache Airflow, for its part, has remediated a lot of security issues with version 2.0.0 that was released in December 2020, making it critical that users of the software update to the latest version and adopt secure coding practices to prevent passwords from being exposed.