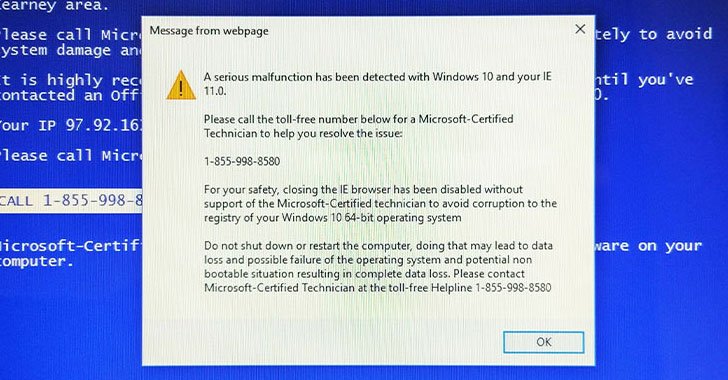 It’s no secret that the internet isn’t a very safe place. And it’s not hard to understand why. It’s a medium that connects billions of people around the world that affords bad actors enough anonymity to wreak havoc without getting caught. It’s almost as if the internet’s tailor-made to enable scams and fraud.

And that’s just what it does. Right now, the world’s on track to lose $10.5 trillion every year to cybercrime. That number is so large that it’s hard for the average person to grasp. And when most people hear it, they imagine that money’s coming mostly from large-scale data breaches and ransomware attacks on large companies.

Although businesses are among the hardest hit each year, they’re by no means the only target. Every day, internet users are targeted too. They face barrages of phishing emails, compromised websites, and booby-trapped downloads. But among all of the attacks aimed at rank-and-file users, there’s one that stands out – the tech support scam.

What are Tech Support Scams?

Tech support scams happen when people receive a message – either through a popup on their screen or an unsolicited phone call – insisting that something’s wrong with their computer and needs fixing. But what the perpetrator really wants is remote access to the user’s PC. And once they have it, they try and collect personal and financial data to enable further crimes like bank fraud and identity theft. And they’re so common that Microsoft estimates that three in every five internet users get targeted every year.

But there are some things that the average internet user can do to protect themselves from tech support scams. They can start by building awareness of how common tech support scams work. Then, they can arm themselves with some digital security tools to minimize the odds of becoming a victim in the first place. Here’s what they can use.

The first digital tool that internet users can deploy to avoid tech support scams is a malicious site and/or ad blocker. This is effective because many of the fraudulent tech support popups users encounter are the result of visiting compromised websites. Sites are vulnerable when webmasters fail to secure their site installations, which happens more often than you’d think. So, blocking known compromised websites is an excellent and effective way to avoid encountering those popups at all.

For those who don’t want to go as far as blocking ads outright, there’s a utility called Spyware Blaster that works quite well on Windows-based PCs. It secures web browsers to prevent a variety of exploits that make fraudulent popups possible and prevents access to a variety of known bad websites. Best of all, it’s free if you don’t mind updating the software manually from time to time (or you can purchase the auto-update feature for a nominal fee).

But for complete protection, something like uBlock Origin is a good option. It’s a browser plugin that relies on crowdsourced data to block all kinds of advertising, cookies, and known bad websites. It’s also free for personal use and works on today’s most popular web browsers.

When threats like spyware began to proliferate in the early 2000s, most internet users knew that having an active and updated antivirus/antispyware solution on their device was essential to stay safe. But in recent years, users have gotten less vigilant about playing defense. Back in 2018, antivirus maker Webroot found that almost 50% of Americans had given up on using an antivirus altogether.

Well, that’s a big mistake. It turns out that the protection that’s built into most modern operating systems doesn’t work nearly as well as third-party solutions. Having an active and updated antivirus/antimalware solution on your PC is still a good idea, and will generally keep it trouble-free and running well. Plus, having a known antivirus on your PC makes it much harder for a scammer to trick you with a popup. After all, you’re not likely to believe a random onscreen message when your known antivirus program says everything’s OK, are you?

A Secure and Private VPN Service

Last but not least, internet users should add a secure and private VPN service to their defensive arsenal. A VPN won’t stop you from giving a scammer remote access to your PC (only you can do that), but most VPN services don’t play nice with common remote access software. That alone might buy you enough time to realize that you’re about to be victimized and prevent the scammer from gaining access to your machine.

And as a bonus, many VPN providers offer website filtering, which works just as well as the malicious site and ad blockers mentioned earlier. That makes them excellent at preventing many of the ads and popups that facilitate tech support scams. And, they help to keep your data safe at all times by encrypting your internet traffic as it passes back and forth between your PC and its intended destination – so they’re great at preventing a variety of other data theft attacks, too.

At the end of the day, the best way to avoid falling victim to a tech support scam is to know that no company – not Microsoft, Apple, or anyone else – is ever going to call you or create a popup asking you to call them. Neither will any reputable antivirus vendor. In other words, if something were to go wrong on your computer for real, you’d likely be the only one to notice it.

But tech support scams rely on the chance that they may catch even a savvy user in a vulnerable moment. So it’s worth deploying the technologies listed here anyway to stay safe. Together, they prevent many of the attack vectors scammers use to trick you and keep your computer running virus and malware-free at all times. And while there’s no bulletproof solution available, being prepared is better than not.