Trend Micro’s Zero Day Initiative (ZDI) on Wednesday announced the targets, prizes and rules for Pwn2Own Vancouver 2022, scheduled to take place May 18-20 alongside the CanSecWest conference.

This year’s Pwn2Own will be hybrid — participants can attend in person in Vancouver or they can tune in remotely and have their exploits run by ZDI staff. Registration closes on May 12.

In the case of Tesla, the prizes are largely the same as in the previous year, when no entries were submitted in the automotive category. However, at Pwn2Own 2022, both a Model 3 and a Model S are available as targets. In addition to a top prize of $600,000 for hacking a Tesla, researchers can earn the car itself. 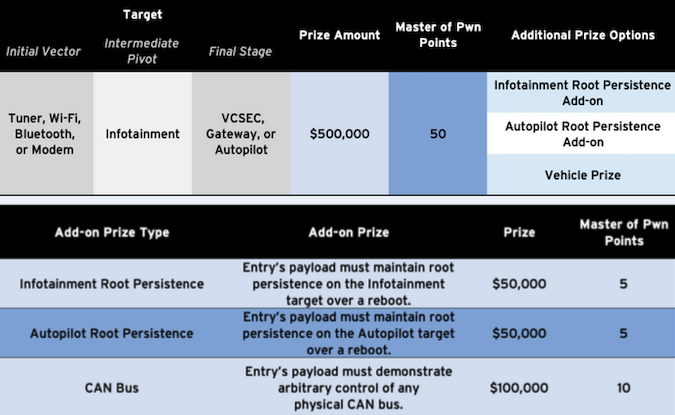 The Samba interoperability suite has been added to the server category, with rewards of up to $75,000. The highest prize is offered for Windows RDP and Exchange exploits.

In the fall, at Pwn2Own Austin 2021, participants earned a total of more than $1 million for their router, printer, NAS, smartphone, and smart speaker zero-day exploits.

The only event comparable to Pwn2Own in terms of prizes is China’s Tianfu Cup, where participants last year took home a total of $1.9 million.