A Temple University research project that tracks ransomware attacks on critical infrastructure has documented more than 1,100 incidents to date.

SecurityWeek first wrote about the project in September 2020, when the database included roughly 680 records. The latest version of the critical infrastructure ransomware attacks (CIRWA) database catalogs 1,137 incidents reported between November 2013 and January 31, 2022.

The database, available for free on request as a Microsoft Excel file, stores information on incidents reported by the media and cybersecurity companies.

Records include the name of the targeted organization, year of the attack, location of the targeted organization, targeted sector, duration of the attack, name of the ransomware family, ransom amount, whether the amount was paid and the payment method, the actual amount that was paid, the source of the information, related incidents, and the MITRE ATT&CK technique ID.

The project is led by Aunshul Rege, associate professor and director of the CARE Lab at Temple University, and the main contributor is Rachel Bleiman, a PhD student in the university’s Criminal Justice program. 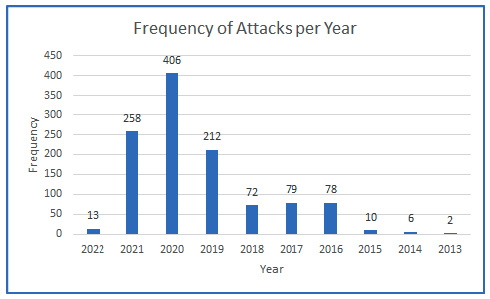 One possible explanation is that many victims were grouped rather than being reported individually. For instance, the same third-party service provider may have been the point of entry for the attackers, such as in the case of the Kaseya incident, where ransomware was delivered to many organizations, but only the names of a few are publicly known.

“Another possibility is that attention was more focused on some attacks (Colonial and JBS) and so there might have been less focus/reporting on other incidents,” Rege told SecurityWeek.

The top three sectors targeted were healthcare, government, and education, but the number of reported incidents fluctuated.

Rege told SecurityWeek that the CIRWA dataset has been requested 925 times by various individuals and organizations around the world. Industry representatives accounted for roughly 29% of requests, followed by students (16%), educators (11%), and government (10%).

While the dataset appears to have been useful to many as it is, the community has suggested adding several other data types, including attack point of entry, threat actor, impact of the attack (other than financial loss due to ransom payment), technical analysis, graphical representations of the data, and distinguishing between the IT and OT aspects of an attack.

“We hope that others in the community can pick these wish list items up and develop new and innovative research trajectories,” Rege said. “The CIRWA dataset is a dynamic entity and the continuous engagement with students, educators, government, and industry will help it develop, grow, and serve the needs of the community.”