Tens of cybersecurity companies expose a large number of assets to the internet, according to a study conducted recently by attack surface management firm Reposify.

It’s not uncommon for major companies to unwittingly expose databases and other assets, but a study conducted by Reposify over a two-week period in January showed that 35 multinational cybersecurity companies and their more than 350 subsidiaries hosted over 200,000 exposed assets. These assets included databases, remote access sites, and cloud services. 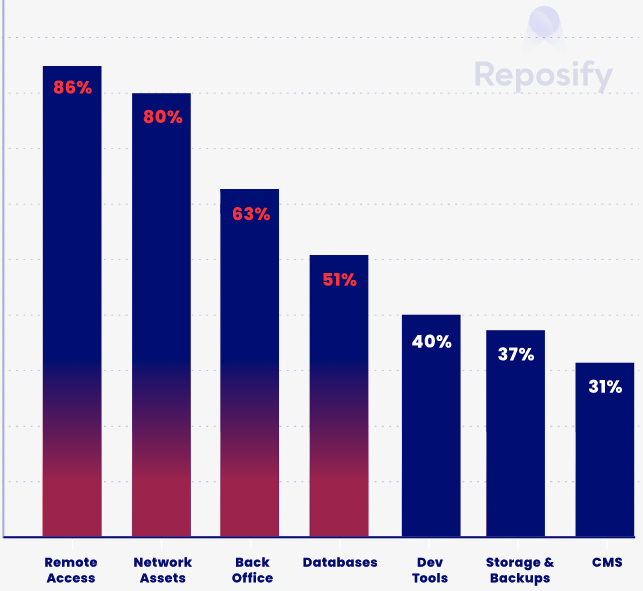 In a vast majority of cases, companies exposed platforms such as Nginx, Apache, OpenSSH, IIS and Portmap, which are “highly sensitive, and the consequence of a breach is severe — particularly in the case of the cybersecurity industry.”

The study showed that more than two-thirds of companies exposed PostgreSQL databases, and half exposed Oracledb databases.

Nearly every cybersecurity company seems to host exposed assets on the AWS cloud platform (97%), followed by Azure (82%) and Google Cloud (76%).

[ You can learn more about attack surface management at

One concerning finding is that — except for storage and web assets — a majority of exposed services are in the organization’s “unofficial perimeter,” which means they are less likely to be monitored.

“Services under unknown perimeters are less likely to be known, and often represent shadow IT, unknown risks, or flag a possible backdoor malactors can use to access a company’s assets,” Reposify said in its report.

More than 40% of the vulnerabilities affecting exposed services have a “high” or “critical” severity rating.

“Just one of these statistics is concerning enough – but the combination points to a sincere need for the industry to better practice what it preaches,” Reposify said.