Microsoft and Okta have both confirmed suffering data breaches after a cybercrime group announced targeting them, but the companies claim impact is limited.

A threat group calling itself Lapsus$ announced recently that it had gained access to the source code of Microsoft products such as Bing and Cortana. They leaked nearly 40 Gb of files allegedly belonging to the tech giant.

However, Microsoft noted that it does not rely on the secrecy of code as a security measure and it has assured customers that the exposed code “does not lead to elevation of risk.” The company also pointed out that customer code or data have not been compromised.

As for identity and access management company Okta, the Lapsus$ group has not leaked any actual data. Instead, they published several screenshots to demonstrate that they gained access to Okta customer accounts. The screenshots appear to show their ability to reset passwords and access an admin panel with elevated privileges, among others. 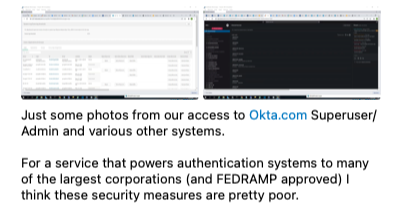 The company said it detected an unsuccessful attempt to compromise the account of a customer support engineer at a third-party service provider in January 2022. An investigation revealed that hackers had access to a support engineer’s device between January 16 and 22.

Okta said the breach impacted roughly 2.5% of its customers — the company claims there are hundreds of millions of users on its platform so that could still be a significant number. Affected customers have been notified and the investigation continues. However, many have raised concerns about why the incident was not disclosed sooner.

The Lapsus$ group claims to be based in Brazil and it has taken credit for attacks on several major companies, including Samsung, NVIDIA, Vodafone and Ubisoft. While some have described Lapsus$ as a ransomware group, threat intelligence company Flashpoint points out that it’s more accurate to describe them as an extortionist group as their attacks do not involve file-encrypting malware. The attacks involve the theft of data and demands for ransom payments.

Microsoft on Tuesday published a blog post detailing the activities, techniques and tactics of the group, which the company tracks as DEV-0537.

According to Microsoft, the group initially targeted organizations in South America and the United Kingdom, but it has now expanded to global targets in various sectors, including government, telecom, tech, media, healthcare and retail. The hackers have also targeted the cryptocurrency exchange accounts of individual users.

Lapsus$ announces its hacks on a public Telegram channel and they don’t appear to put much effort into covering their tracks.

“Their tactics include phone-based social engineering; SIM-swapping to facilitate account takeover; accessing personal email accounts of employees at target organizations; paying employees, suppliers, or business partners of target organizations for access to credentials and multifactor authentication (MFA) approval; and intruding in the ongoing crisis-communication calls of their targets.”