Cybersecurity agencies in the United States, Canada, United Kingdom, Australia and New Zealand have shared a list of the 15 most exploited vulnerabilities of 2021.

The list also includes CVE-2021-26084, an Atlassian Confluence Server and Data Center vulnerability that threat actors started exploiting in early September 2021, less than a week after the vendor announced the availability of a patch.

The national cybersecurity agencies also warned organizations about CVE-2021-21972, a VMware vCenter Server vulnerability that attackers have been targeting since February 2021.

Some vulnerabilities that were often targeted in 2020 continued to be targeted in 2021 as well, which suggests that many organizations have failed to patch them. This includes the Windows flaw dubbed ZeroLogon, the Exchange vulnerability tracked as CVE-2020-0688, a 2019 Pulse Secure weakness, and a 2018 vulnerability in Fortinet products.

Many of the security holes have been leveraged by both profit-driven cybercriminals and state-sponsored threat actors in their attacks. 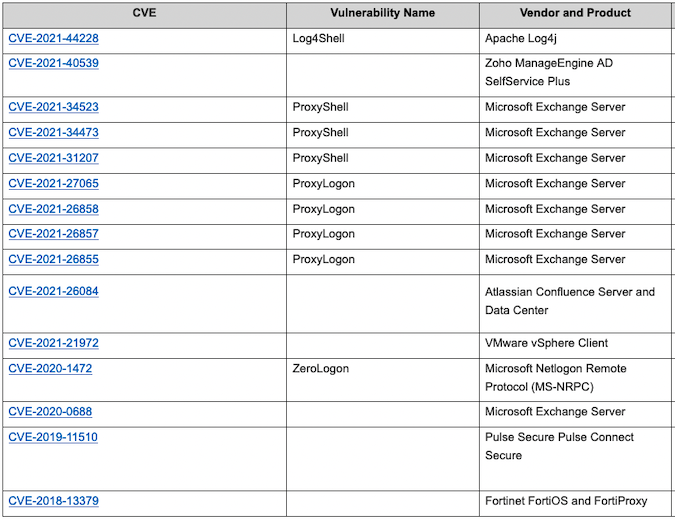 In addition to the top 15 most exploited vulnerabilities of 2021, the agencies warned organizations about 21 other security holes that have been leveraged in many attacks. These affect products from Sitecore, Accellion, ForgeRock, VMware, Sonicwall, Microsoft, Checkbox, Citrix, Cisco, QNAP, Telerik, as well as the widely used Sudo utility.

“Globally, in 2021, malicious cyber actors targeted internet-facing systems, such as email servers and virtual private network (VPN) servers, with exploits of newly disclosed vulnerabilities. For most of the top exploited vulnerabilities, researchers or other actors released proof of concept (POC) code within two weeks of the vulnerability’s disclosure, likely facilitating exploitation by a broader range of malicious actors,” the agencies said in their joint advisory.